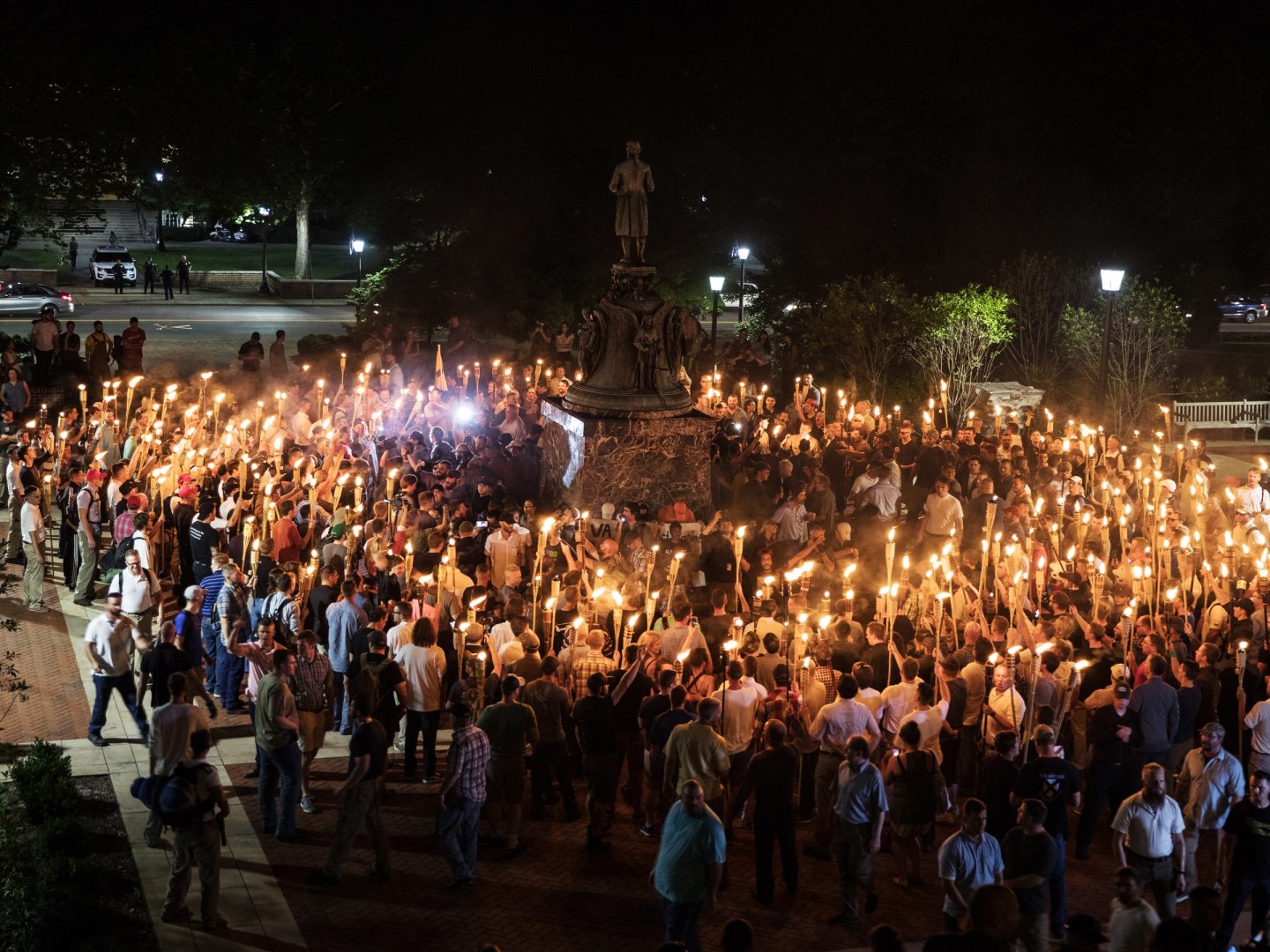 The intended audience of this text is the congregation of Christ Episcopal Church, Roanoke, VA. It was written to be delivered as a sermon on August 13, 2017. Any non-traditional formatting is due to this intended use.

Audio of the sermon can be found here.

I had a sermon prepared for this morning before yesterday, but the events in my hometown of Charlottesville led me to reconsider.

I should begin by saying that I condemn the events in Charlottesville. I condemn white supremacy and those who adhere to that racist ideology.

But I can’t stop there.

As a priest, I confess my own failure to condemn the spectre of white supremacy that has haunted this country for three hundred years and is now coming to the forefront of our national conscience again.

A Christianity that has no words for the people of color who for months (and years and centuries) have watched white supremacists grow more confident and bold has nothing to contribute.

If you’ve ever wondered where you would have stood during the Civil Rights Movement, now is the moment to decide.

If you have no idea what I’m talking about, this weekend a number of neo-nazi and fascist hate groups planned a rally in Charlottesville around the statue of Robert E. Lee. This is not the first time these groups have rallied in Charlottesville.

Hundreds of people, including clergy and the Bishops of the Diocese of Virginia, planned to be in Charlottesville as a counter to the hate proclaimed by the neo-nazi groups.

As the smoke cleared in the hours that followed, we saw the violence that happened. Many people were injured, some arrested, and three people died.

So what does our faith say about this? What does the Gospel of Jesus Christ speak into this moment?

Unfortunately — sinfully — the Church has been quiet for a long time.

For many mainline denominations, many historically white denominations, the Civil Rights Movement of the 1950s and 60s marked a shift towards a spiritualizing of the Gospel. Increasingly, the message became one of saving souls. The Gospel was about receiving Jesus into your heart and little else. It is worth noting that there is nothing in scripture about receiving Jesus into your heart.

This denial of the incarnation, this rejection of the physical reality of human life is the predecessor of the prosperity gospel.

That anyone can read the words of Jesus and with a straight face claim that God’s desire for people is personal wealth and financial success is beyond me.

But it is not a far jump from those who can go to a neo-nazi rally on Saturday and worship the God of Jesus Christ on Sunday.

It is not a far jump from the American enslavers who sat in church pews while enslaving human beings.

And in case you think I am up on my high horse, the cognitive dissonance that has gripped American Christianity is the same that causes people, like me, to read the words of Jesus and walk past a homeless person without making eye contact.

We have separated the Gospel of Jesus Christ from the lived realities of the poor, the oppressed, and the marginalized. We have made the Gospel a self-help program to make better American citizens.

We have neutered the Good News that “there is no distinction between Jew and Greek; the same Lord is Lord of all and is generous to all who call on him. For, ‘Everyone who calls on the name of the Lord shall be saved.’”

Paul’s words sting when he writes,

We are the ones who have been sent to proclaim Good News to the poor, release to the prisoners, hope to the orphans, comfort to the widows.

We are the ones.

The Western world has been presented with a watered-down version of the Good News.

Jesus Christ preached that Truth, with a capital ‘T’, that the peacemakers, the poor, the oppressed, the hungry, the sick – that the very least of these – are blessed.

To be blessed is to be with those on the wrong side of privilege.

To be blessed is to be at the receiving end of the hate offered by the world, because that is where you find Jesus.

I have no doubt in my mind that Jesus was on the side of the counter-protesters in Charlottesville.

I have no doubt in my mind that Jesus stands with the people who proclaim with a shaking voice, weary from having to say it in 2017, that Black Lives Matter.

“I guess it is easy for those who have never felt the stinging darts of segregation to say ‘wait.’ But when you have seen vicious mobs lynch your mothers and fathers at will and drown your sisters and brothers at whim; when you have seen hate-filled policemen curse, kick, brutalize, and even kill your black brothers and sisters with impunity; when you see the vast majority of your twenty million Negro brothers smothering in an airtight cage of poverty in the midst of an affluent society; when you suddenly find your tongue twisted and your speech stammering as you seek to explain to your six-year-old daughter why she cannot go to the public amusement park that has just been advertised on television, and see tears welling up in her little eyes when she is told that Funtown is closed to colored children, and see the depressing clouds of inferiority begin to form in her little mental sky, and see her begin to distort her little personality by unconsciously developing a bitterness toward white people; when you have to concoct an answer for a five-year-old son asking in agonizing pathos, ‘Daddy, why do white people treat colored people so mean?’; when you take a cross-country drive and find it necessary to sleep night after night in the uncomfortable corners of your automobile because no motel will accept you….when you are harried by day and haunted by night by the fact that you are a Negro, living constantly at tiptoe stance, never quite knowing what to expect next, and plagued with inner fears and outer resentments; when you are forever fighting a degenerating sense of ‘nobodyness’–then you will understand why we find it difficult to wait.”

We cannot wait any longer.

The Gospel calls us to condemn white supremacy with our words and actions. To put our privilege on the line in the name of Jesus Christ.

Dietrich Bonhoeffer wrote, “We are not to simply bandage the wounds of victims beneath the wheels of injustice, we are to drive a spoke into the wheel itself.”

This is not a pleasant topic or a nice discussion and I am sure there are those who wish I wouldn’t bring this up.

It would have been much easier to keep the sermon I had written before yesterday, but as Christians, we must call things what they are.

Whenever Jesus encountered a demon in the Gospels he first called it by its name. This is uncomfortable and necessary work.

There are those who are at arm’s length, imagining that any discussion of racism or Confederate statues or white supremacy is a discussion of history and theory, but I can assure you – for people of color it is a reality, it is life, and it is unavoidable.

White supremacy is not a problem for people of color to solve.

It is a problem for white people to solve.

We must speak up and stand up.

Those of us with privilege must surrender our comfort for the sake of the Gospel. We must follow Peter out of the boat and into the waves of our modern age, for Jesus is already standing on the waves and saying, “Come.”

If the Episcopal Church has nothing to say about Charlottesville, then what are we doing? Are we worth saving from decline?

If our churches have nothing to say about injustice, what Good News do we have to offer?

We must keep our eyes on Jesus and our feet in the march towards the Kingdom of God, on earth as it is in heaven.

We must keep marching forward to a day where problems are not solved with torch-lit marches or nuclear bombs.

There is grace in this message.

When the disciples cry out for help in today’s Gospel, Jesus responds immediately.

Jesus is with us when we cry for help.

So we must keep marching forward to a day when the hungry will be filled and their tears wiped away.

This is our calling.

We are the ones sent to proclaim this Good News.